Translated from the Chinese by Conor Stuart. This is a short story taken from City of Tears (哭泣哭泣城 kuqi kuqi cheng, 2002) by Roan Ching-yue (阮慶岳) , an architect and professor based in Taipei.

Can I still be heart-broken

He arrived in Hanoi in the afternoon. He didn’t know what to do, so he just wandered around the busy districts and the little alleys near Hoan Kiem Lake, buying a few things for the sake of it, then an old opera house building towering at the end of the street drew him over; there were people queuing up to buy tickets at the booth, he approached and asked a woman what was going on, she said it was an event celebrating the fortieth anniversary of something, and that there was an opera performance from Paris, she said it would be really good and that he shouldn’t miss it.

There was still some time remaining after he’d bought the ticket, and after turning a few corners he came across a beer garden where he sat down to order a drink; there were a few western patrons scattered throughout the bar, mostly in couples or in groups, he was sitting alone, feeling a strange unsettling feeling of not knowing where to direct his gaze. He was still unable to convince himself that he was already here in Hanoi, or indeed of the reasons why he had come, it didn’t seem that this was the course his life should be running, but he really sitting here now, it was strange but inescapable.

The sky darkened suddenly, he paid the bill and then made his way gradually back to the opera house. Along the road there were young pedlars, one of them wouldn’t go away and followed him through a few alleys, a beggar woman urged her daughter, who couldn’t have been older than three or four years old, to hold on tight to his trouser leg; this all made him rather uncomfortable, he had a french opera to enjoy, if only these people, the onslaught of which he was helpless against, would stop appearing in front of him, in the square in front of the opera house he could still see the young policeman standing at attention, indifferently looking on without seeing, he even began to feel resentment against the Vietnamese government for allowing these two completely different worlds to coexist, such inappropriate neighbours with no way to avoid clashing. END_OF_DOCUMENT_TOKEN_TO_BE_REPLACED 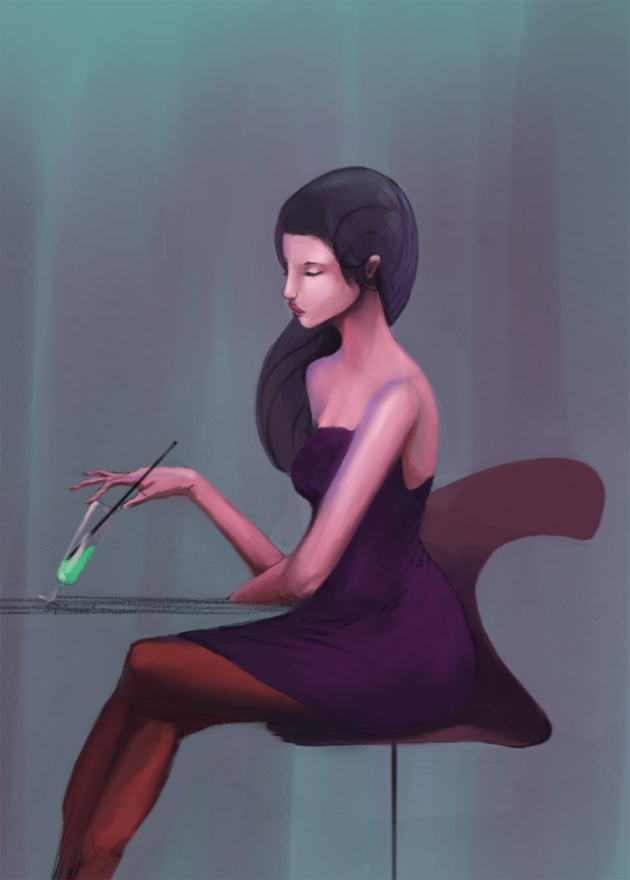 Lolita Hu (胡晴舫) was born in Taipei and graduated from the Foreign Languages Department of National Taiwan University and went on to get her masters in the Theatre Department of The University of Wisconsin. In 1999 she moved to Hong Kong. She writes cultural criticism as well as short stories and essays. Her works have been published in the media in Mainland China, Taiwan, Hong Kong and Singapore. She currently lives in Tokyo.

Dim light is cast by the dragon-head-shaped wall lights, the pulse of electro shakes the entire space, comfy sofas divide the room into different nooks and crannies for people to drink in, pink nylon and muslin hang from the ceiling to the floor, prints of hundreds of bored faces are faintly discernible upon it. It could only be the hottest spot in Beijing this weekend.

Every three months a new nightclub appears in Beijing, and everybody trips over themselves to go there. The nightclub will normally be in a hutong, a dilapidated courtyard style house or a factory that’s about to be demolished. The same people every time scurry along to explore the new bar, they spout their cigarette smoke while telling you in lofty tones how the music in this new place is cool. After three months have passed, if it’s not that the style of the music has changed, or that the building which houses the club has suddenly been demolished by the city government, then it’s that it loses popularity for no particular reason whatsoever. Another bar opens, it’s also housed in an old factory, a hutong, or a traditional courtyard style house, wherever it may be, it always sounds incredibly cool.

Everyone vies with one another to be the first to spread the news. Then, at the new bar you meet the same familiar faces who recommended the old bar to you so enthusiastically.

When someone mentions the old bar, it’s as if they’re talking about a has-been celebrity. It’s so passé, they say. I don’t even know why it was so popular in the first place, it’s only logical that it’s become as out of fashion as it should have been in the first place.

It’s Friday night at 2am at the hottest bar of this couple of months, situated in the Sanlitun area. She has drunk quite a lot, but she’s still quite sober. She came with a friend who had a song twenty years ago which was popular throughout the whole of Beijing but who never followed it up with any other songs, when meeting a stranger he would always say “I’m so-and-so, do you want to buy me a drink?’. She would stand next to her friend, then not long after that she would ditch him, and sit down next to an immaculately dressed foreigner.