A Dictionary of Maqiao is a really considered and philosophical book, whilst managing to retain an earthiness and wit throughout.

I liked the way the narrator poses the book as an effort to deconstruct traditional story-telling. He sees the traditional novel as directing its gaze selectively – focusing in on those things that relate to the central narrative, while ignoring the things that are on the periphery of this:

END_OF_DOCUMENT_TOKEN_TO_BE_REPLACED

I recently posted a list of Chinese character variants and the Taiwanvore blogger posted an additional pair of variants to the list in the comments section – one in very common usage in Taiwan, specifically 裡 (for Cangjie fans that is 中田土) and 裏 (卜田土女). This variant pair is quite a rare example in modern Chinese as both are in regular usage, although according to Taiwan’s Ministry of Education, 裡 is the standard character (正體) and 裏 is the variant (異體). END_OF_DOCUMENT_TOKEN_TO_BE_REPLACED 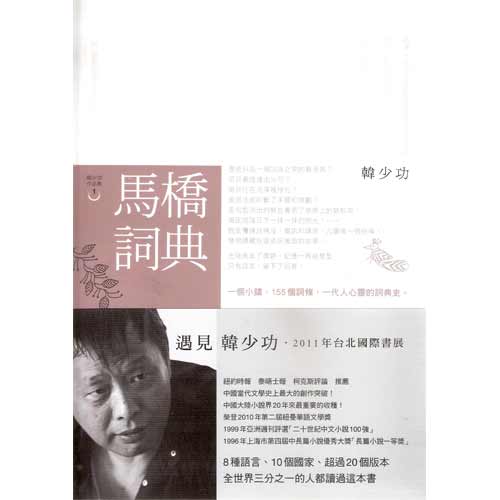 OK – just a quick post today! Am reading 《馬橋詞典》(Dictionary of Maqiao) by 韓少功 (Han Shaogong) at the minute and came across a word for a woman’s period or menstruation – 例假 – that I hadn’t seen before. For some reason I read this as 例期 however and looking it up I found the variant 朞 – a bottom top variant of 期 – combining 其 and 月. This reminded me of a few other variants that follow this pattern, like 峰 and 峯 feng1 “summit,” and 群 and 羣 for “qun1” crowd.

There’s also 鑒 and 鑑 jian4 which have their ingredients stirred around a little.

Let me know if you know of any others!