Roan Ching-yue is an architecture professor in Taiwan and has written several stories featuring gay themes, including ‘The Pretty Boy from Hanoi‘ and ‘The Con Man‘ (click through for my translation), both featured in the short story collection City of Tears (《哭泣哭泣城》), this was his first long-form novel and it was published in 2002.

We meet the protagonist of this novel at a time of crisis. An only child, he meets a man resembling his dad who claims to be his brother by the same mother and father. Despite the questions that surround the man’s sudden appearance in his life, he accepts him as a brother pending further inquiry. It’s at this time that he finds out that his company is moving the majority of its employees to China, so he quits and fails to find another job, so has a larger amount of free time. Over this period he discovers that his “brother” is gay and then we are introduced to the brother’s perspective, with a chronicle of his childhood growing up in Australia and his wild sex life.

The glimpses we get of the brother’s life, show him to be a lot more carefree than the protagonist, however, one of the main stories he recounts involved an attempt to shame him:

[My translation] I was once at a motel in Los Angeles and, bored, so I decided to pleasure myself. I stuffed the cap of a bottle of shaving cream into my ass. As I was unable to get it out again, I had to go three days without moving my bowels. I gradually lost my appetite and my face turned a shade of reddish purple. The doctor at the emergency room knew, of course, what I’d done, but he insisted on forcing me to recount all the gory details of what I’d gotten up to that night in the motel room in front of a group of strangers comprised of interns and nurses. He made me lie squatting on the bed like a dog, while he and his female assistant tried in vain to take it out, threatening that if I didn’t cooperate as best I could, he would have to cut my anus open with a knife. I calmly asked him: How long would the wound take to heal if you cut it open? He said: Maybe a lifetime, maybe you’d never be able to use it again for anything but shitting.

I accepted him shaming me through the entire process and at the moment when he finally retrieved the plastic cap, I sprayed the shit I had accumulated over several days out of my elevated ass all over him and his assistant just as the cap slid out.

END_OF_DOCUMENT_TOKEN_TO_BE_REPLACED 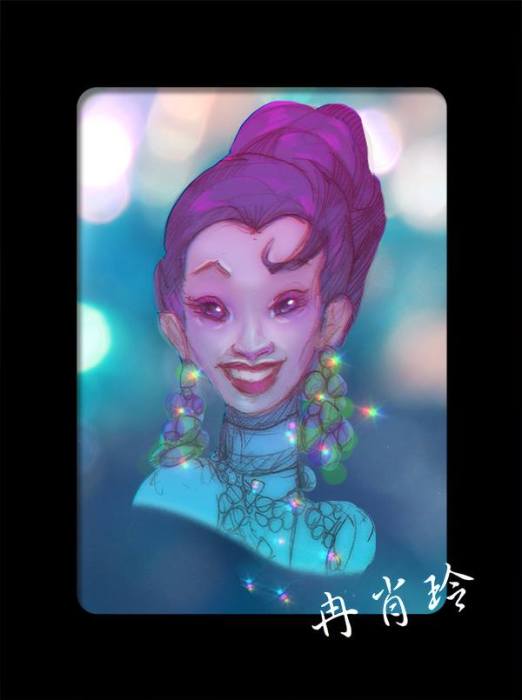 He was a con man.

He felt like a cotton-bound paper lantern, panicking that he would be seen through at any moment, giving off, as he was, a glow of affability and affection from every pore, both tantalizing and haughty. After he’d finished a con, he gave his arrogance even freer reign, but he wasn’t normally able to trust his feelings to others. They were his private hoard, a secret love affair, delectable, but not to be shared out loud. Sometimes he felt so stifled that it was as if his insides would rip open in a roar, but then he would use a soothing motherly tone to subdue his organs, bursting as they were with pride-fed excitement, saying, Be good now, I know… but you can’t tell anyone! You can’t tell anyone! You should all be quite aware of that now, shouldn’t you!

The jubilation was like an infant wailing for its mother’s breast, making him feel like a helpless new mother cradling it closer to his chest, rocking it and saying, Don’t cry, don’t cry, come on! Let’s go for a walk to the riverside and see the rainbow. On the street he would be even more cautious, not allowing his arms to fall from his body for even an instant, for fear that the infant inside him would start to wail. Try though he might to contain himself, he wasn’t able to disguise an appearance of self-satisfied mirth and haughtiness, in the drab blur of the crowds, especially with his lantern-like translucent splendor.

His organs would be soothed by the sight of the rainbow and enter into the heavy slumber of sated beasts. However, sometimes the joy he felt was so strong, it would wake him up at night and he would break his taboo by spilling all to his beloved stuffed goose. Like tonight… he couldn’t get images of A out of his head, flowing like restless spirits struggling to emerge from within him, scattered over the countless past months, like colored flags which circle happily in the wind over time, illuminating the lantern case which shrouded him to such an extent that it was as if he would burst into flame any minute.

On nights like this he was left with no other option but to tell the story of A at length to the attentive-looking stuffed goose.

I Lie Because I Love You END_OF_DOCUMENT_TOKEN_TO_BE_REPLACED

I found this version of 夜 in Roan Ching-yue’s 《哭泣哭泣城》 The Sobbing City, from which I translated ‘The Pretty Boy from Hanoi’ in a previous post: 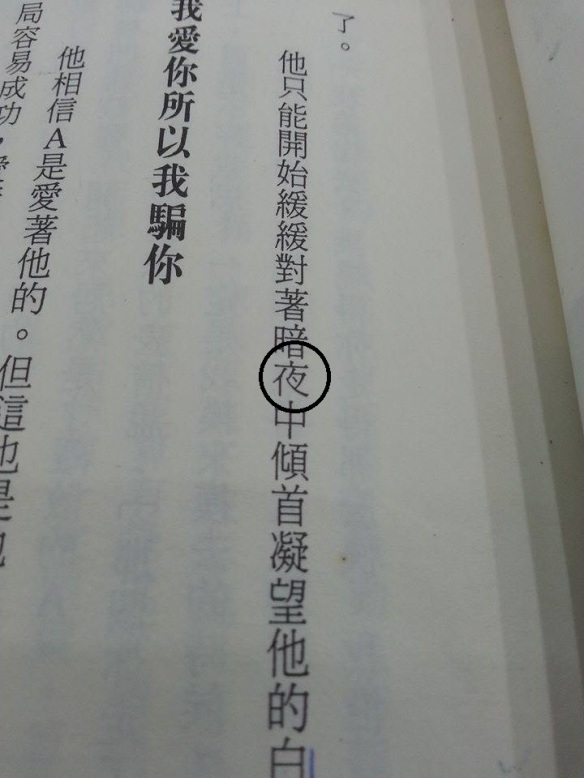 Does anyone know what font this is? All the fonts I have on my computer have both their legs – I like the elegance of this form of 夜 though. Anybody familiar with it? Comment below.

By the way, I’m planning a few more translations from this collection of short stories, so look out for them over the coming months.

For Chinese font watchers, I recently came across this book in a Taipei book store.

I had a little flick through – though budget constraints prevented me from buying it yet. From what I saw it explains variations in the use of font in shop, road and MRT signs, looks to be an interesting read.

Dafont has some additional Chinese fonts for those interested.

Translated from the Chinese by Conor Stuart. This is a short story taken from City of Tears (哭泣哭泣城 kuqi kuqi cheng, 2002) by Roan Ching-yue (阮慶岳) , an architect and professor based in Taipei.

Can I still be heart-broken

He arrived in Hanoi in the afternoon. He didn’t know what to do, so he just wandered around the busy districts and the little alleys near Hoan Kiem Lake, buying a few things for the sake of it, then an old opera house building towering at the end of the street drew him over; there were people queuing up to buy tickets at the booth, he approached and asked a woman what was going on, she said it was an event celebrating the fortieth anniversary of something, and that there was an opera performance from Paris, she said it would be really good and that he shouldn’t miss it.

There was still some time remaining after he’d bought the ticket, and after turning a few corners he came across a beer garden where he sat down to order a drink; there were a few western patrons scattered throughout the bar, mostly in couples or in groups, he was sitting alone, feeling a strange unsettling feeling of not knowing where to direct his gaze. He was still unable to convince himself that he was already here in Hanoi, or indeed of the reasons why he had come, it didn’t seem that this was the course his life should be running, but he really sitting here now, it was strange but inescapable.

The sky darkened suddenly, he paid the bill and then made his way gradually back to the opera house. Along the road there were young pedlars, one of them wouldn’t go away and followed him through a few alleys, a beggar woman urged her daughter, who couldn’t have been older than three or four years old, to hold on tight to his trouser leg; this all made him rather uncomfortable, he had a french opera to enjoy, if only these people, the onslaught of which he was helpless against, would stop appearing in front of him, in the square in front of the opera house he could still see the young policeman standing at attention, indifferently looking on without seeing, he even began to feel resentment against the Vietnamese government for allowing these two completely different worlds to coexist, such inappropriate neighbours with no way to avoid clashing. END_OF_DOCUMENT_TOKEN_TO_BE_REPLACED

Chinese Tales of the Strange and Anomalous, translated (roughly) by Geoff Humble

The poetry of ineptitude.

Reading Books From China's Past