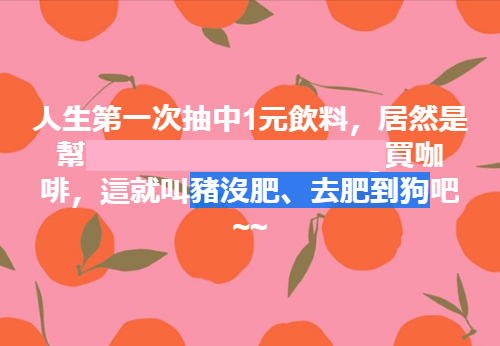 A friend of mine posted a Taiwanese phrase in a Mandarin-language Facebook post recently that caught my eye:

For the first time in my life I got a drink for NT$1 in a lucky draw, and it turned out to be when I was buying a coffee for [name omitted], isn’t this what they call [lit.] the pig not getting fat, while the dog balloons.

There seems to be several variations of this phrase, including the one above, the version my colleague suggested 「豬沒肥，肥到狗」(ti bô pûi, pûi tio̍h káu) and the one listed on the Ministry of Education dictionary 「豬毋大，大對狗去」(Ti m̄ tuā, tuā tuì káu khì (Click link for audio)). A literal reading of the phrase is someone being unable to fatten their pig for market, while the dog, which is meant to serve as a guard dog, and should be agile, is getting fat instead.

A very horoscope-heavy profile on Weiling Chen (陳慧翎), the director of the Taiwanese drama On Children (《你的孩子不是你的孩子》) and the actor in the recent first episode, Ivy Yin (尹馨) makes reference to this interpretation, when the director (Chen) mentions that her mother once used the phrase, comparing her and her younger brother:

“Piscean Chen Weiling’s pressure growing up came from not being understood. She always remembers when her mother said, “the pig won’t get fat, while the dog gets fatter,” questioning why she was more brilliant than her little brother.”

It does seem to have a wider application, however, as both the poster and the subject of my friend’s post were male. In this context it’s kind of a mixture between ‘casting pearls before swine’ and a bitter cry of ‘why do some guys have all the luck.’ My friend is suggesting (jokingly) that he deserves good luck, but instead it’s being wasted on his friend.

A report in the Liberty Times used the phrase in a political context too, although the fact that Tsai Ing-wen is a woman may make the use of the phrase more natural. If you couldn’t tell from the subtle objective tone below, Liberty Times is not a big fan of the KMT:

“The KMT has always considered cross-strait relations its strength, and its leading elites take their orders from Beijing. Now, it seems, this has become toxic to their election hopes, so these heroes are unable to make use of their skills in this department.

As the situation continues to evolve, if Tsai Ing-wen doesn’t make any mistakes, the overall trend of the November election isn’t hard to guess at, as only the party in government will be sitting pretty in the mid-term elections. It’s only this situation that will drive Beijing to reconsider their stance on Taiwan. Cross-strait tensions are unlikely to ease until next year. However, China, in the end, is sure to discover that “the pig isn’t getting fatter, while the dog is ballooning”. Isn’t this dialectic quite good fun?”

This suggests that China will end up working with the DPP (the fat dog), rather than the KMT (the skinny pig), despite its idea of which party should be the best for it to work with.