He hadn’t joined the ballroom society out of interest, but had heard the other guys in his dormitory making a fuss over the teacher’s sexy body, her short skirt and high heels and the way her hips swayed like a snake. It didn’t matter if you could dance, the teacher would let you put your arms around her waist, and show you the steps one on one. The guys at university clearly had nothing better to do, as the next day the society’s classroom was heavy with testosterone, twenty or thirty pairs of eyes all fixed on the teacher’s lithe swaying curves.

There wasn’t the one-on-one instruction that had been promised, and the teacher had a male teaching assistant–a master’s student–who was specifically tasked with dealing with these idle young men. As there weren’t enough girls, the teacher paired boys with other boys, so after the first few classes, the guys had all scarpered, along with their ulterior motives.

Each society had to prepare a performance for the school’s anniversary celebration, but the ballroom society was having trouble finding a boy for theirs, which put the whole performance in jeopardy. For some reason, he was the only boy to have answered the phone call from the ballroom teacher. The teacher asked him personally to rejoin the team for the anniversary party performance. Helpless to resist the teacher’s telephone charm offensive, A-lung put on a brave face and agreed to go back to dance practice.

First, the teacher ran through the choreography and paired up the dancers, then she delegated supervision of practices to her TA. Given A-lung’s good posture, the teacher had paired him with one of the veteran dancers of the troupe so she could help him out as a novice, to bring the performance up a notch.

However, A-lung’s partner was angry at not being given a central role in the performance. It was one thing to lose out to one of the other girls in the dance society, but to have to go on stage with a rookie like him… She hadn’t cracked even a sliver of a smile since they’d started practicing together. If A-lung made an error more than once or twice, she shot him an icy look, as if he had two left feet.

END_OF_DOCUMENT_TOKEN_TO_BE_REPLACED

I previously posted two blog posts  looking at how 「不恥」 and 「不齒」 are used as homonyms to mean “shame” in Ruan Ching-yue’s short story ‘The Conman’ (translation available here) and in A Dictionary of Maqiao by Han Shaogong (review available here), despite the former actually meaning “unashamed”. This suggested that most Taiwanese now use 「不恥」 rather than 「不齒」 , while reading 《斷代》 by writer Kuo Chiang-sheng however, I discovered a counterexample:

In this sentence, 「不齒」 is used as follows:

The book is really good so far and I’d definitely recommend it.

Just a quick update on what I’ve been reading and what I plan to read over the coming months. 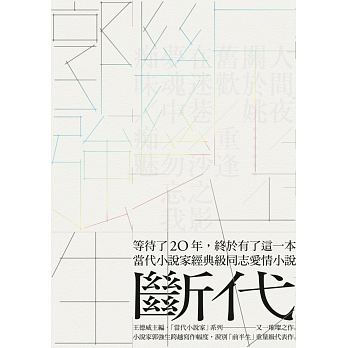 I bought a book called 《斷代》 by  Taiwanese author Kuo Chiang-sheng (郭強生) after the salesperson recommended it at the GinGin Bookstore and have just begun to read it. I suspect the title is a piece of wordplay, as it can mean “to divide between distinct periods of history” and by extension hints that the book goes into the division between the older and younger generation of gay men in Taipei and the driving ideologies behind their attitudes (this certainly seems to be the case from what I’ve read so far); in addition to this, however, 「斷」 also means “cut” and 「代」can mean “successor” – which suggests the title also points to the gay experience as the final generation of a family (in that they cannot reproduce). This put me in mind of a passage from Chu Tien-wen’s (朱天文) brilliant Notes of a Desolate Man (《荒人手記》):