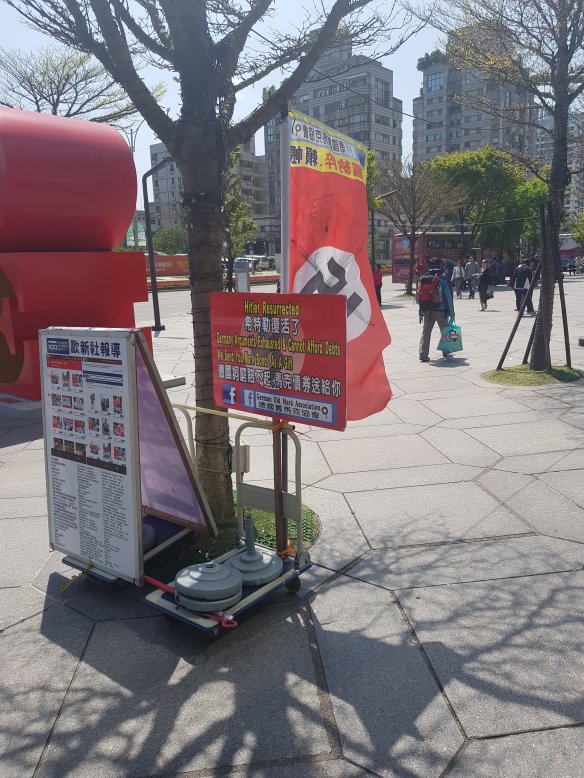 Outside 101 is a bit like Hyde Park Corner in London. Lots of “interesting characters” on soap boxes. This man was previously pictured protesting Germany’s alleged refusal to reimburse Reichmark bonds issued in Taipei by Japan in the 1920s, with the Japanese reportedly forcing many Taiwanese to buy them against their will. He’s actually posted screen shots from the European Press Photo Association on another placard beside him. He was suggesting their refusal constituted being Nazis again and his placard still says “Hitler Resurrected”. He’s resorted to passive aggression now, stating in English and Chinese that given Germany’s failure to address or engage with the argument and that “they can’t afford it anyway”, he was giving the bonds as a gift to Germany. For more info you can check out their Facebook Group The Old German Mark Association. Looks like he’s had some abuse about his use of the Nazi flag, as he or someone else has crossed it out and drawn a thumbs down on it. Lots of media coverage on his protest, so maybe that’s what has led to his change of heart. 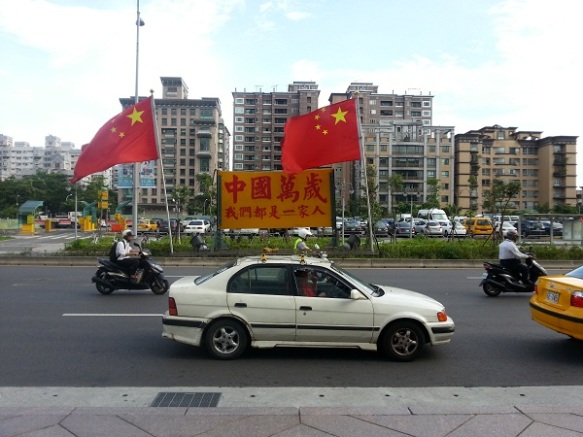 Have been showing my little sister round Taipei, which occasioned the customary visit to Taipei 101. After the guided audio tour around the top – which is basically an extended advertisement by the Taipei City Government – and the trawl through the layers of gift shops set up to make it feel like a complete tourist trap, we descended back to ground level and caught sight of this guy driving around the district:

The message on top of the car says “Long live China” then underneath it says “We’re all one family”. He’s a pro-reunification activist – hoping that China can incorporate Taiwan, which is currently an independent country – although the majority of people I saw reacted to him more with incredulity or amusement than anything else.

The area outside Taipei 101 is often an interesting place to visit, as Falungong practitioners meet with mainland tour groups, along with other tourists. Falungong is banned in Mainland China, after a mass rally was organized by practitioners, which Beijing saw as a threat to its authority.

Paul Farrelly, a doctoral candidate at Australian National University and contributor to eRenlai, did a slideshow on the Falungong protesters which gather around the main sites visited by mainland tourist groups in Taipei, watch it here: