「奧步」 is the common written form for the Taiwanese expression 「漚步」 àupō͘ meaning a sly or crafty move.  This is just one of those phrases you’ll hear again and again. I heard it a while ago in the run-up to the election:

“Especially when at the minute everyone is actually waiting to see what crafty maneuver the DPP will end up pulling at the last minute.” 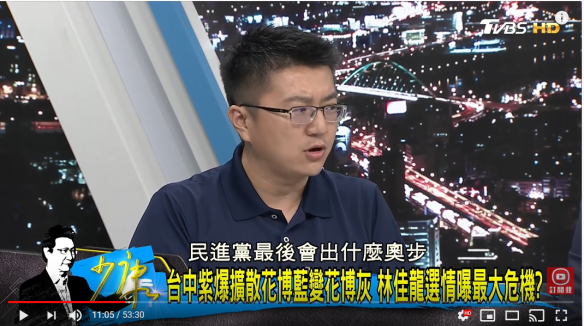 You can hear it around the 11:04 point in the video below:

I heard it again just now while getting my hair cut (shorn off), in the Taiwanese soap opera 《炮仔聲》 (Ep 327) playing in the background.  It was translated into Mandarin in the subtitles as 「耍手段」:

“That Kang Hong-kiat is a real piece of work, he’s always got some sly trick up his sleeve. If he isn’t buying people off, he’s using people’s families to threaten them.”

Earlier in the episode, one character describes getting a woman drunk in order to get her into bed (quite rightly) as an 「奧步」, although this time it’s translated into Mandarin as 「卑鄙手段」 “how could I use that kind of dirty tactic?”

It’s one of those really useful phrases that’s really hard to find the right situation to use. In the first example I used, it’s used in a Mandarin sentence, so you can use it that way too, but make sure your tones are on point if you’re going to, or you’ll stand there shamefacedly repeating yourself until you have to spell it out like I did in the kitchenette at work when I called my colleague a 抓耙仔 jiàu-pê-á/liàu-pê-á (a snitch). I said bei instead of pei or something *shrugs*.