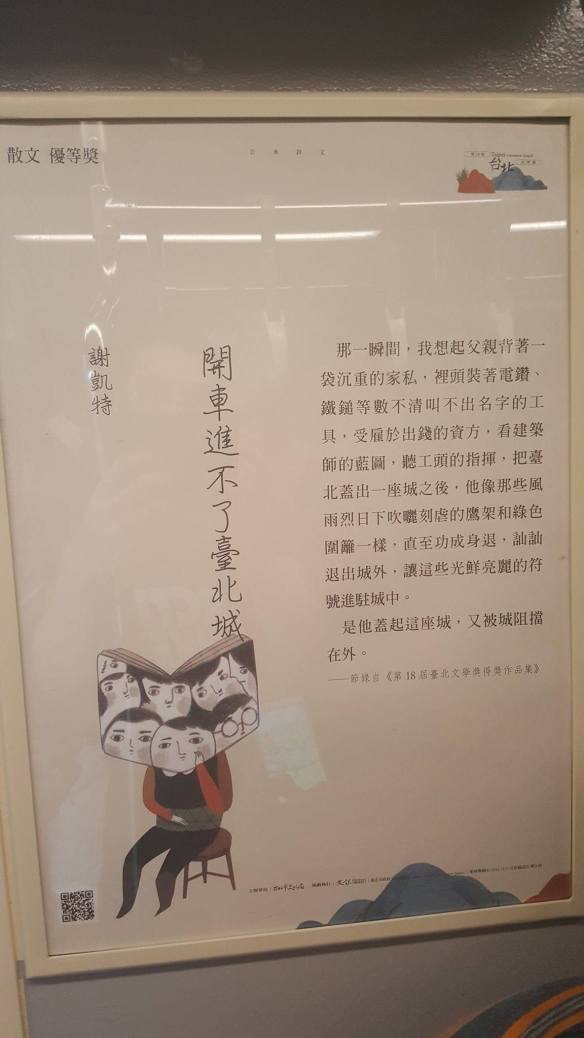 You Can’t Drive Into Taipei City    by Hsieh Kai-te

In that instant, I thought of my father carrying a big bag of his things on his back, with his electric drill, his hammer and countless other tools I don’t even know the name of inside. Under contract from the moneyed classes to build the city of Taipei, he consulted the architect’s blueprint and listened to the instructions of the foreman, before, just like the scaffolding and walls of plants from the building site, weathered by the wind and rain then scorched by the sun until hollowed out, he returns to obscurity, sheepishly withdrawing from the city, allowing these symbols of grandeur to establish themselves there.

It was he who built this city, but he who is held beyond its limits.

This kind of prose always repels me to some extent, although I admire the imagery of the scaffolding. One reason for this is because I always think that overtly political art (with the possible exception of newspaper cartoons) generally comes across as preachy and tends to oversimplify nuanced issues. This was also one of the reasons I really didn’t like a lot of the work of theatre director Wang Molin. Another reason is that it echoes a lot of the political rhetoric of trade unionists and implies a sense of unpaid debt to the imaginary working class builders, mechanics and plumbers that pepper the speeches of Conservative politicians when they’re trying to incite anger against immigrants or intellectuals. The subtext to this is an implication that newcomers to the city and non-working class people are being rewarded at the expense of working class people. This kind of notion is often what feeds the xenophobia and inter-class resentment that featured heavily in both the Brexit referendum campaigns and in the recent US election campaign by Donald Trump.

Despite this, I do have sympathy for the chip on the shoulder view of Taipei that many people from central and southern Taiwan have, as I had the same chip on my shoulder when visiting London from Belfast growing up. Lots of people in Taiwan call Taipei the 「天龍國」 and Taipei citizens 「天龍人」. This is a term suggesting that they are elitist and look down on others. It takes its origins in the term “World Nobles” (Japanese: 天竜人 Tenryūbito) from Japanese manga One Piece and literally means “Heavenly Dragon Folk”, snobby arrogant elites who serve as the world government in the manga.