As the legislative and presidential elections draws near in Taiwan, politics is in the air… and on buses and on every street corner.

If anyone missed the first part of the presidential candidate debate on Dec. 27, you can view Part 1 here:

Meanwhile, in District 8, independent Lee Ching-yuan (whose KMT membership was revoked in July due to his opposition to then KMT presidential candidate Hung Hsiu-chu) is gunning for incumbent legislator Lai Shih-bao. He’s released two leaflets with the intention of smearing Lai, both on the basis of whether he’s actually living in the district and his alleged incompetence in dealing with food-safety issues surrounding the Ting Hsin oil scandal.

The first leaflet attacking Lai on the Ting Hsin scandal is below: 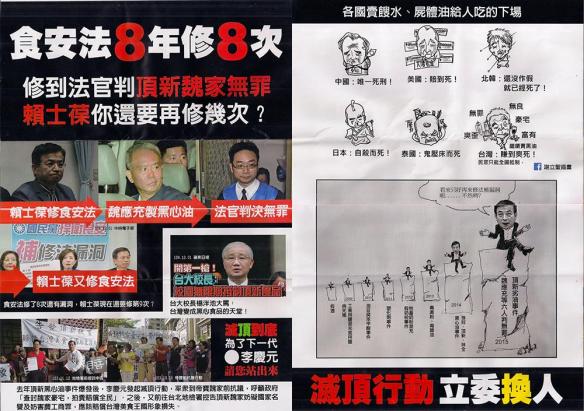 The first page of the leaflet reads:

Amended to the extent that the judge found the Wei family who run Ting Hsin International Group not guilty.

How many more times are you going to amend the food safety laws, Lai Shih-bao?

Below it then charts the process with arrows from photo to photo:

Then there’s a subtitle:

After eight amendments to the food safety laws there were still loopholes, and now Lai Shih-bao wants to amend it for the ninth time?

Next the leaflet charts major steps in the anti-Ting Hsin movement:

Taiwan has become a paradise for adulterated foods!

Below Lee is pictured taking part in protests against Ting Hsin in October and November of 2014 with the caption:

Last year after the Ting Hsin scandal broke, Lee Ching-yuan started the anti-Ting Hsin movement, leading the public to the front of the Wei’s home in The Palace condo complex to protest, calling for the government  “to seal the Wei’s luxury home and to hold an auction to compensate the people”. Later, he also went to the Taipei District Prosecutors’ Office to sue the Wei family for besmirching Taiwan’s international reputation and for harming the businesses of workers, farmers and businesspeople, stating that they should make up for Taiwan’s loss of its image as the “Kingdom of cuisine”.

The other side of the leaflet is dominated by two cartoons, the first is entitled “What happens to people from different countries when they sell rancid water and corpse oil”: 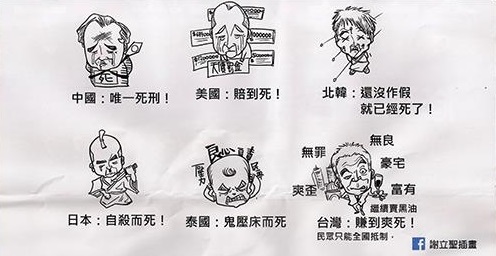 (from top left) China: Certain to be given the death penalty!

(bottom middle) Thailand: Killed by a ghost in a state of sleep paralysis!

(bottom right) [A figure surrounded by the words: “Not guilty”, “No conscience”, “Luxury villa”, “Rich”, “Bliss”]  Taiwan: Earn money until you “die” of happiness.  The masses can only do their best to prevent this.

The second cartoon is a chart of the big food and drink scandals in Taiwan over previous years, with Lai Shih-bao pictured sitting on top:

2009: Industrial salt passed off as cooking salt kills a pig

Above all this Lai Shih-bao is pictured stating:

It looks as if we’ll have to amend the food safety legislation again to plug up the loopholes… what else can I do?

The second issue Lee uses against Lai is his address: 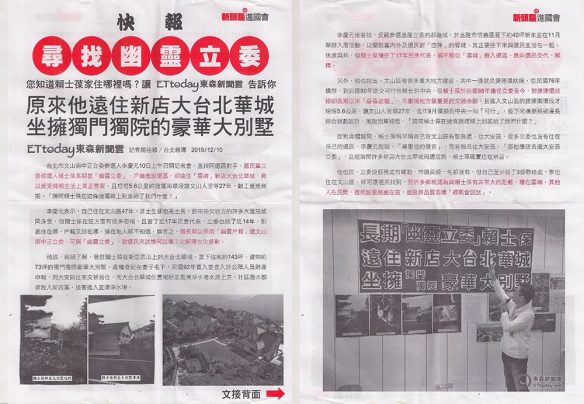 The leaflet cleverly uses an ETtoday article which is clearly reporting on Lee’s own press conference, to give the smear the appearance of objectivity. The journalist who wrote the article is even mentioned to this end. For brevity’s sake I’ve just translated the titles and the bits in red:

Seeking the ghost of a legislator

Do you know where Lai Shih-bao lives? Let ETtoday tell you

It turns out he lives in distant Huacheng, in the Xindian area of Greater Taipei ,in a detached luxury villa with its own courtyard.

(In red) KMT legislative candidate Lai Shih-bao has been a “ghost legislator” for a long time, as although his household registration is in his electoral district, he actually lives remotely in Huacheng, in the Xindian area of Greater Taipei, which makes it hard for him to get a feel for what his constituents really need…

Lai has used his “ghost household registration” to run for legislator in the Wenshan South Zhongzheng electoral district, so you could call him a “ghost legislator”. What kind of impression should voters take from this? It requires an explanation and an apology…

Lai Shih-bao has been a legislator for 17 years, but he’s not willing to move from the his remote cloud into his electoral district. He needs to give his constituents an explanation for this…

Since Lai became a legislator in 1999 he’s been snoozing on the job when it comes to the MRT Circular Line, ignoring one of the most important local transportation networks…

And many of his constituents feel worlds apart from Lai Shih-bao, as Lai has his head in the clouds, while other people are with the people. Although his service office is here, but people know exactly what kind of quality it provides.

If you missed the previous article on the battle of Wanhua, between independent heavy-metal vocalist-cum-legislative candidate Freddy Lim and KMT incumbent Lin Yu-fang click here.

Let me know what’s going on in your district in the comments section, or feel free to submit anything you want featured! I’d also like to know what people thought of the debates, or who you’ll vote for, or would vote for if you had the vote!

I also saw two more election banners in and around my district: 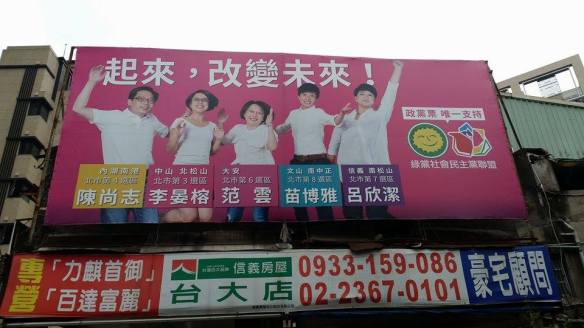 Stand up, change the future! (It rhymes in Chinese)

There is also a call for voters to choose the alliance in the “party vote” – this is a proportional representation vote with the entire nation as one constituency, by which 34 legislators are elected. 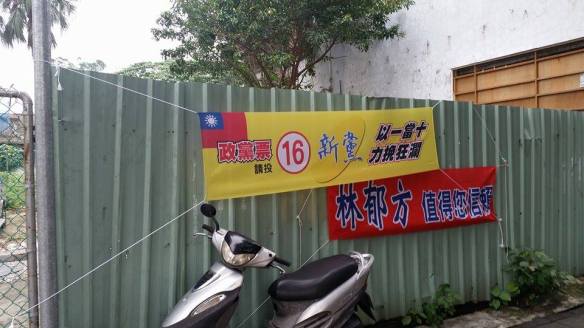 I also saw this banner for the New Party on the street – the first election material I’ve seen from them. The New Party broke off from the KMT during the tenure of Lee Teng-hui. My former colleague who supported the New Party told me that Wikipedia was not to be believed and that the Chinese equivalent Baidu is far more accurate on historical events, so maybe that can give you a hint as to the party’s ideology. This poster is also for the party vote (proportional representation vote for party list legislators). Underneath is a banner for Lin Yu-fang, the KMT incumbent in Wanhua District + Zhongzheng District Li 21 (Taipei’s 8th electoral district).

There’s a helpful Chinese-language summary of the way the party vote (政黨票) works as well as the aboriginal legislator vote and the district votes here.