As the legislative and presidential elections draws near in Taiwan, politics is in the air… and on buses and on every street corner.

If anyone missed the first part of the presidential candidate debate on Dec. 27, you can view Part 1 here:

Meanwhile, in District 8, independent Lee Ching-yuan (whose KMT membership was revoked in July due to his opposition to then KMT presidential candidate Hung Hsiu-chu) is gunning for incumbent legislator Lai Shih-bao. He’s released two leaflets with the intention of smearing Lai, both on the basis of whether he’s actually living in the district and his alleged incompetence in dealing with food-safety issues surrounding the Ting Hsin oil scandal.

The first leaflet attacking Lai on the Ting Hsin scandal is below:

The first page of the END_OF_DOCUMENT_TOKEN_TO_BE_REPLACED

Just a quick update on what I’ve been reading and what I plan to read over the coming months.

I bought a book called 《斷代》 by  Taiwanese author Kuo Chiang-sheng (郭強生) after the salesperson recommended it at the GinGin Bookstore and have just begun to read it. I suspect the title is a piece of wordplay, as it can mean “to divide between distinct periods of history” and by extension hints that the book goes into the division between the older and younger generation of gay men in Taipei and the driving ideologies behind their attitudes (this certainly seems to be the case from what I’ve read so far); in addition to this, however, 「斷」 also means “cut” and 「代」can mean “successor” – which suggests the title also points to the gay experience as the final generation of a family (in that they cannot reproduce). This put me in mind of a passage from Chu Tien-wen’s (朱天文) brilliant Notes of a Desolate Man (《荒人手記》):

Following on from my past post on the passive aggression that results from the limited parking spaces in Taipei, I thought I’d follow up with a similar post about rubbish, after seeing this sign, on a street in the Daan district of Taipei:

If you live in Taipei you’ve probably seen a whole heap of signs similar to this, but the hysterical tone and the interesting use of punctuation of this particular one made it stand out for me. It reads:

Can’t you have the least shred of decency? Don’t pile rubbish up here!!?? Dogs come here to eat it every day and there is shit everywhere.

If you don’t live in Taiwan you may be unfamiliar with the system. Basically you have to buy special bags at convenience stores to put rubbish in, then at a certain time  every day the rubbish trucks will come to the end of your street. Unlike in the UK, you END_OF_DOCUMENT_TOKEN_TO_BE_REPLACED

The outside of the embankment was still a deep green in early autumn, the only exception being the cotton-like grey of the miscanthus ears, spreading out in a continuous unbroken strip of their own, the branches appearing a lot softer when in the wind. Amidst the rustling of the leaves and grass, one could hear a clacking sound, like something was rolling toward the riverside. Pushing aside the undergrowth as she went, an old hunch-backed woman dragged a ragged looking old pram along the ground. The frilly lace on it had already gone black and it was full of plastic bottles and sheets of used paper. She looked hesitantly in all directions as she made her way onward, her body lowered to enable her easier access to the ground. The rickety wheels continued to clack as she made her way along the riverbank searching for anything of value.  Behind her ran a line of corrugated iron shacks and across a few loofah trellises, was a small path, cut out among the weeds, leading to a little temple, with a roof of red glazed tiles and mottled yellow walls with several scars, as if marked by lightning. The door was wide enough for a person to pass through with their arms outstretched and the statues of the lords of the three realms – the heavens, the earth and the waters – stood fixed on a platform under the roof, golden crowns on their heads and beards down to their chests, each holding a tablet underlining their divine authority, clothed in official garb of glistening divine gold.

END_OF_DOCUMENT_TOKEN_TO_BE_REPLACED

Have you been enjoying the flood of campaign leaflets flowing through your letterbox? I’m living near the boundary between the 5th and 8th electoral districts, so have been getting a range. One particular leaflet released by KMT candidate Lin Yu-fang (林郁方) caught my eye, as the entire thing was dedicated to smearing Lin’s rival for the 5th electoral district of Taipei, Freddy Lim (founding leader of the New Power Party (時代力量) and lead singer of heavy-metal band Chthonic): 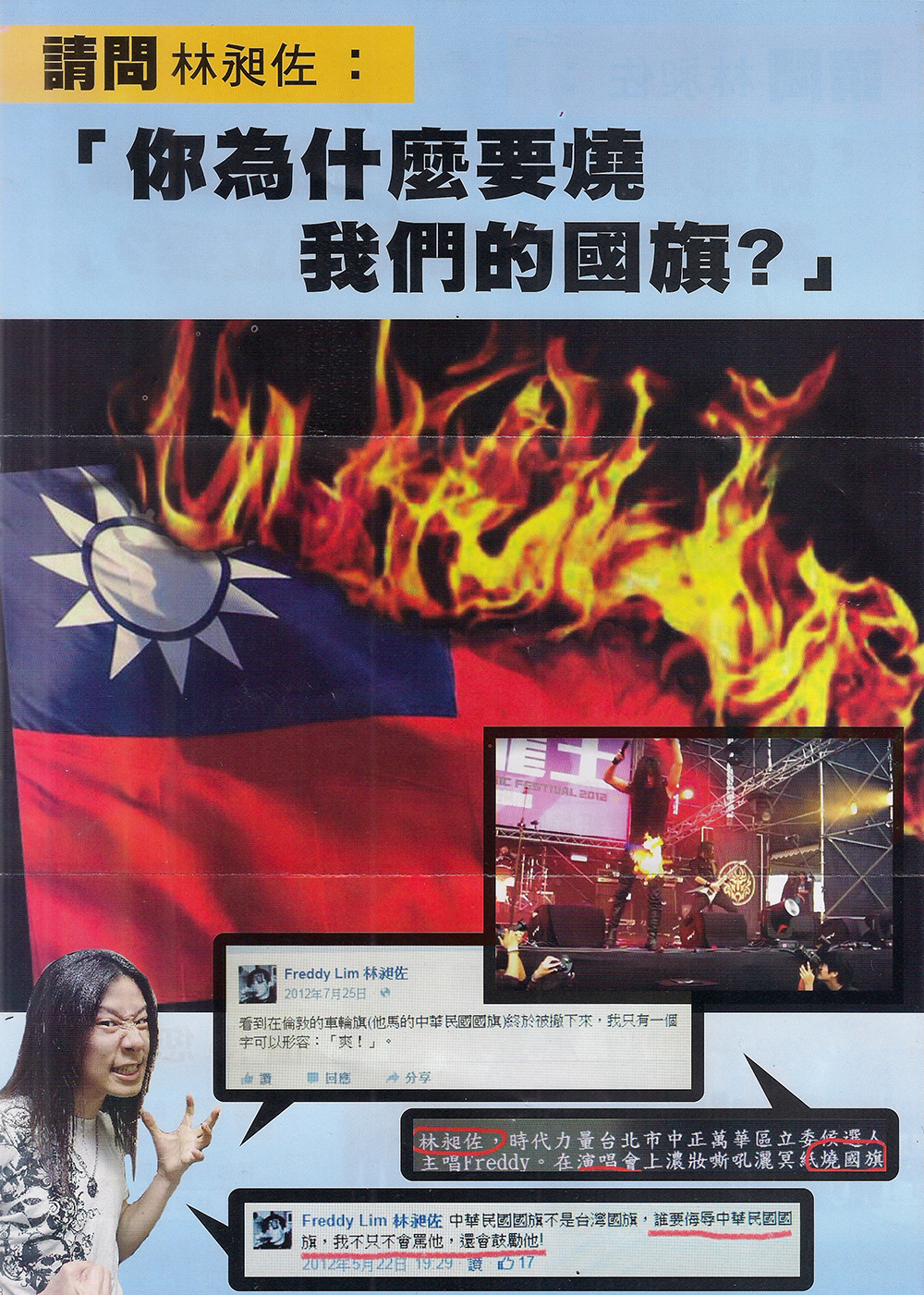 The front side of the leaflet poses a question to Lim:

I want to ask Freddy Lim: “Why did you burn our national flag?”

END_OF_DOCUMENT_TOKEN_TO_BE_REPLACED

I was walking around the Taipei Botanical Garden when I came across this sign, which explained some plant idioms. Think this sign could have specified more of the Chinese idioms and provided a proper equivalent in English to explain the idioms properly, but definitely a cool idea: 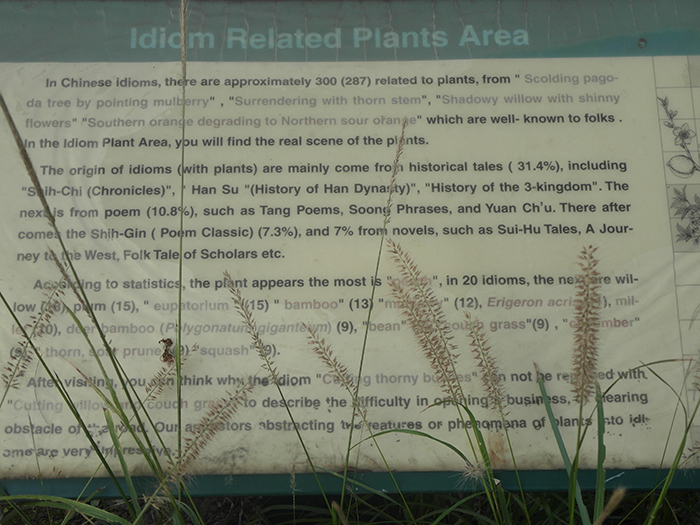 The  first idiom is expanded to one side as follows: END_OF_DOCUMENT_TOKEN_TO_BE_REPLACED

I never realized that the term for the “ghost or God money” (variously called 金紙、陰司紙、紙錢 and 冥幣 in Chinese) that we use in English, “joss paper”, is a Chinese-English pidginization of the word God in Portuguese “Deus”.

It’s odd because I’ve used it so often without thinking to look up its origin. I guess I’d always assumed it was from Cantonese like other terms more commonly used in English like “pak choi” for 白菜 bai2cai4. Incidentally the Taiwanese for joss paper is kim-chóa. The reason there are so many different names for it in Chinese is because different kinds of paper are burned for different kinds of spirits, whether they be ancestral ghosts, deities or the ghosts of the recently deceased.

Update: The Oxford dictionary states that the term came from Dejos, the Javanese corruption of the now obsolete Portuguese word for god Deos, which in turn came from the Latin Deus. It was first used in the early 18th Century. Not sure if was just the term “joss” to refer to god was coopted in reference to China by the Portuguese in Macau as one commenter (Keoni Everington) suggested or how it came to be used in the West. It says that it refers to Asian religions though. Would love it if anyone has any details on this.

Check out and forest trailing. Last day of freedom
Balcony lunch prepping for hot springs
Thanks to the most hospitable family in #Taipei, who hosted a bunch of #老外 for #LunarNewYear @jc_sushi_bar
Nice Thai food in a chill setting. Thanks @tonymeds and @gianalex0830 for being great hosts as always.
#ATV fun
Always time for #HotSprings