Recently when flicking through my Facebook feed I saw this photo taken by my friend Tariel in Penang in Malaysia. 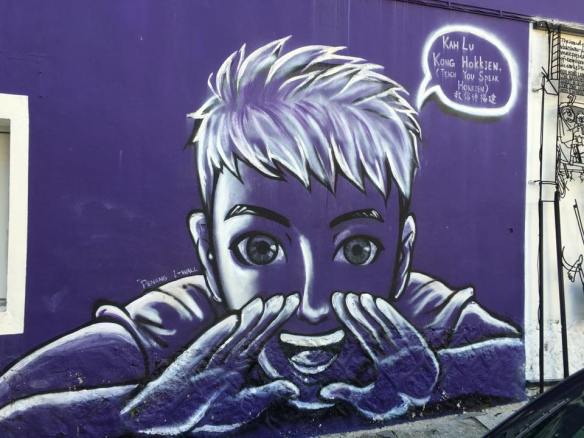 What caught my notice was the speech bubble in the top right corner:

In Taipei one would normally hear this pronounced as “kà lí kóng Hok-kiàn” (Click each word to hear).

What struck me, was the that the 「你」 which I’d always heard pronounced “lí” in Taipei had been romanized as “lu”.

In Penang they mainly speak the Zhangzhou (漳州) dialect, similar to the dialect of Hokkien spoken in the cities of Tainan and Taichung, Yilan and Yuanlin. In this dialect words like 「你、豬」 end in the consonant “i”, whereas in the Xiamen dialect, they can end in either “i” or “u” and in the Quanzhou (泉州) dialect (spoken by the majority of speakers in Anping, the coastal areas of Central Taiwan, Penghu and Taipei) it is normally pronounced “ü”, although in both Taipei and Anping it is actually pronounced “i”. (《臺灣閩南語語法稿》，楊秀芳著，大安出版社、1991)

Following this logic, if the majority of speakers from Penang speak Zhangzhou dialect, then 你 should be pronounced “lí”. If you look up “you” in this Penang Hokkien dictionary, however, you find “lú“. This is due to the influence of other dialects on Penang Hokkien.

There is a handy section on Wikipedia noting the main differences between the Penang and Zhangzhou dialect as below:

The second point suggests the main reason for the “lu” in place of the “li” in the wall art in the picture.

Thanks to Tariel for the picture which inspired this post and feel free to contact me with any cool Taiwanese words or phrases you hear and want featured on the blog.

1 thought on “Penang Hokkien – Zhangzhou with a twist 檳城福建話”